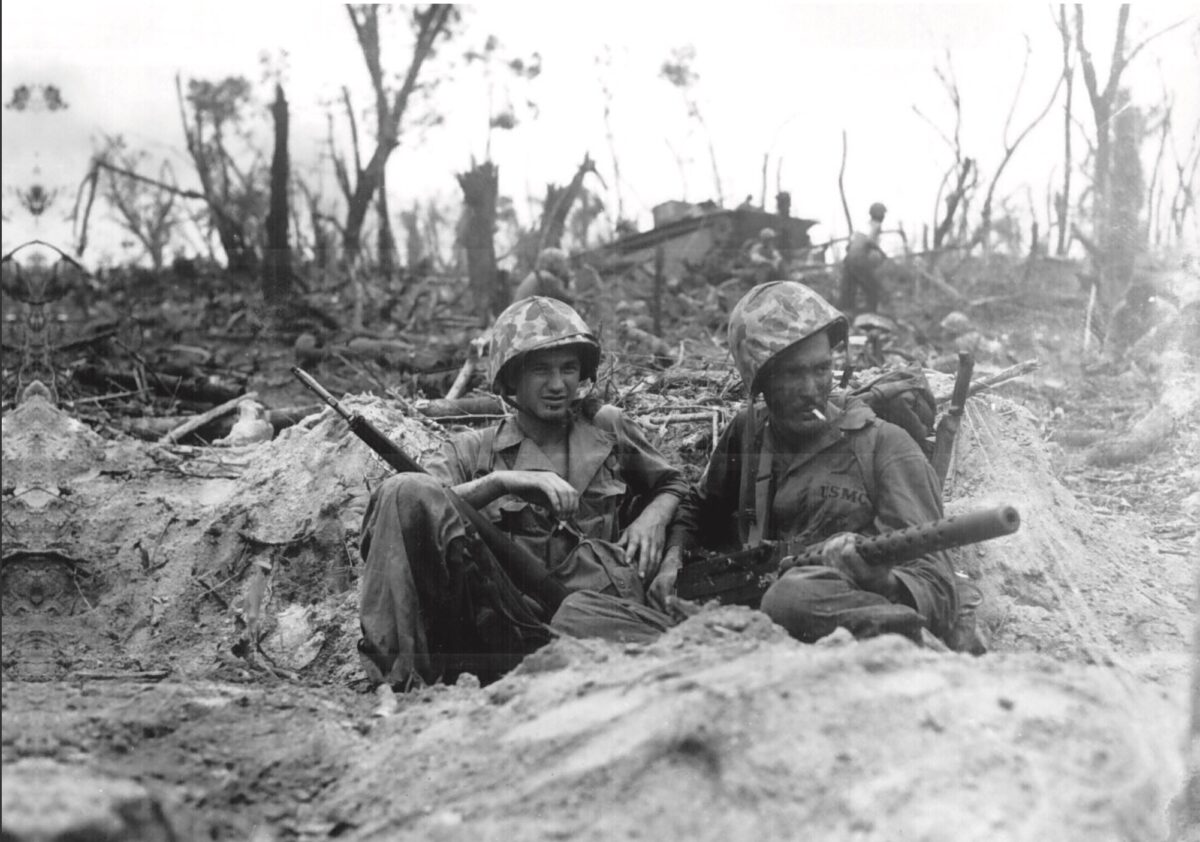 We salute as heroes the men and women who fight for a cause, speak moving words or champion timeless ideals, and for good reason. Yet some of the greatest heroes of World War II were the men and women on the home front, who applied their wits, tenacity and famous American entrepreneurial innovation to equip soldiers overseas with the tools necessary to victoire. Saginaw Steering Gear, a division of General Motors, was one such company: its ingenious application of automobile assembly line principles to the manufacture of the famous Browning M1919 machine gun gave the American GI and its allies the power to fire necessary to overcome tyranny.

As the late 1930s approached, the United States faced an unprecedented crisis. The Imperialist Empire of Japan, already deeply engaged in a brutal war with China, and Nazi Germany, having completed the “Anschluss” of Austria in March 1938 and turning immediately to engulf the Sudetenland in October, seemed both likely adversaries as conflict loomed. But a critical problem remained: the United States had effectively erased its military might after World War I.

As soon as the soldiers returned from “there” in 1918 and 1919, the United States, eager to avoid further European entanglements, reduced its army considerably: from a height of several million conscripts during the war to an army of less than 200,000 – an army smaller than that of Portugal. The weapons this small force had to wield were also hopelessly outdated and poorly maintained. Archival footage from the 1930s shows soldiers training with wooden sticks for bayonets and broomsticks for machine guns. As the likelihood of war grew, President Franklin Delano Roosevelt quietly asked several civilian manufacturers to explore whether their factories could be converted to wartime armaments production.

Saginaw Steering Gear, founded in 1906 as “Jacox” – the Jackson, Church and Wilcox company – produced its “Jacox gear”, first for Buick automobiles, then for all vehicles produced by General Motors, after its acquisition in 1909. The division, renamed Saginaw Steering Gear in 1928, was renowned for precision manufacturing and for producing parts with the tight tolerances—the allowable limits of a part’s variation from design specifications—necessary to the modern automobile. The invasion of Poland on 1 September 1939 galvanized the public in favor of military spending, and in 1940 Saginaw Steering Gear was awarded a contract to produce the Browning M1919 machine gun, with the first pilot guns to be completed for review by December 1941. .

The Browning M1919, designed by legendary inventor John Moses Browning, was an air-cooled improvement over the previous water-cooled M1917, but the improved action had one major drawback: it was a complicated firearm. Each weapon required 190 components, with 77 successive machining operations, and very tight tolerances down to 0.0005 inches. Engineers, accustomed to developing complex assemblies for automotive gears, took an approach based on first gun principles: at each step, engineers asked why a part was there, why was it made like she was and how this process could be suppressed. or improved to speed up production.

The brilliant engineers at Saginaw Steering Gear have turned the manufacturing process upside down. Working in an environment that wouldn’t take no for an answer, engineers disassembled test guns, studied every component in minute detail, and developed an all-new assembly line process for gun manufacturing. In the spirit of Henry Ford, plant managers performed motion and time studies on their employees to determine the most efficient layout of the facility.

Having already developed a metal casting operation for the gears, they adapted the process to the M1919. They replaced some of the complex machined parts – those that had to be formed on milling machines or lathes, which relied on skilled labor – with castings that matched or exceeded the strength of the original parts. This reduced the number of time-consuming manual operations per gun. The barrel fairing – the component that protected the barrel, perforated to dissipate heat – was originally machined, with each hole drilled into the cylindrical blank by a skilled machinist. The Saginaw team replaced this entire process with perforated sheet metal, an automated process that saved crucial minutes from the production of each weapon. Faced with a tedious but critical barrel washing process before each inspection, engineers installed an automatic barrel washer, which alone increased production by 50% per hour.

While some in the War Department had complained when the contract was awarded to a company with no experience in manufacturing firearms, the delivery of the first pilot pistol seven months ahead of schedule won over Saginaw’s critics. . The factory went into full production, with the production contract calling for the delivery of 280 guns at a price of $667 per gun by March 1942. Saginaw Steering Gear delivered over 28,700 guns and, in service to their country, reduced the price to just $141.44 per weapon, more than 100 times the units at 20% of the original contract price. But they were just getting started. By the end of the war, with production in full swing at a dedicated factory, Saginaw Steering Gear had built and shipped an impressive 412,000 Browning M1919s and unilaterally reduced the price to just $54.72 per unit. , or 8% of the initial offer. They had succeeded in reducing the number of man-hours per gun from 76 to 19; saved the war effort over $240 million in 1945 dollars; and their clever use of casting, part simplification, and streamlining saved hundreds of tons of steel for building airplanes, ships, and tanks.

By the end of the war, the United States of America had earned the title of “the arsenal of democracy”. More than half of all Allied materiel – that is, all weapons, vehicles, ammunition and other warfare equipment – was manufactured in the United States and shipped overseas to its allies. Almost every American played a part in this heroic feat of production and did so freely and with a sense of duty and patriotism. Saginaw Steering Gear machine guns were mounted on British planes and Soviet tanks and carried into battle by American GIs through the jungles of Guadalcanal and the hedgerows of Normandy. By applying classic American entrepreneurship to the problem of equipping an army, Saginaw Steering Gear proved that free men and women can accomplish wonderful things.