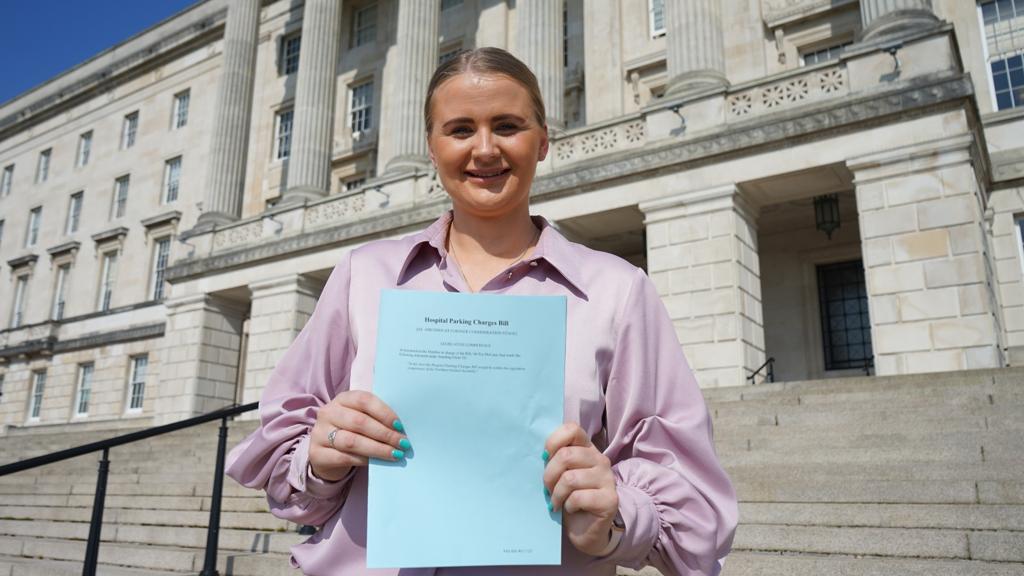 Fees for using hospital car parks will be scrapped in 2024 following the passage of a bill introduced in the Assembly by West Belfast MP Aisling Reilly.

The Bill, which was originally introduced in the Assembly by fellow Sinn Féin member Fra McCann on his last day in office, will see hospital car parks become free for staff, patients and visitors .

Speaking in the Assembly Hall, Health Minister Robin Swan paid tribute to Mr McCann and Ms Reilly for their work introducing the Bill.

“I would like to start by congratulating the sponsor of the Hospital Parking Fees Bill, Aisling Reilly, for her work in getting this Bill through the legislative processes and at all stages of this House.

“I would also like to thank again Fra McCann for initially introducing it during his tenure,” he said.

class to see @aislingreillysfThe bill to abolish hospital parking fees passes its final stage on the last day of the assembly. A crucial bill that will put money back in the pockets of workers, families and patients during an unprecedented cost of living crisis pic.twitter.com/w41XW35Yes

The minister thanked members for approving his amendments to the bill at the in-depth review stage and said the bill will affect the lives of staff, patients and visitors, although he acknowledged that he will present some challenges for his ministry and the health and social care trusts. .

Welcoming the bill’s arrival at this stage, Aisling Reilly thanked members for their support and contributions at various stages of the debate on the bill.

“I especially want to thank the minister and his department for working closely with me,” she said.

“I thank the minister for his amendments and his willingness to work to make sure this bill is practical because it will make a huge difference for people.

“I also hope this addresses concerns that some members had raised throughout the committee regarding timing and potential unintended consequences.

“In presenting these amendments, I hope they will address most of the concerns of members.”

This will keep money in people’s pockets. pic.twitter.com/Zs9MPHmG5H

Do you have anything to say on this issue?
If so, why not send a letter to the editor via this link?