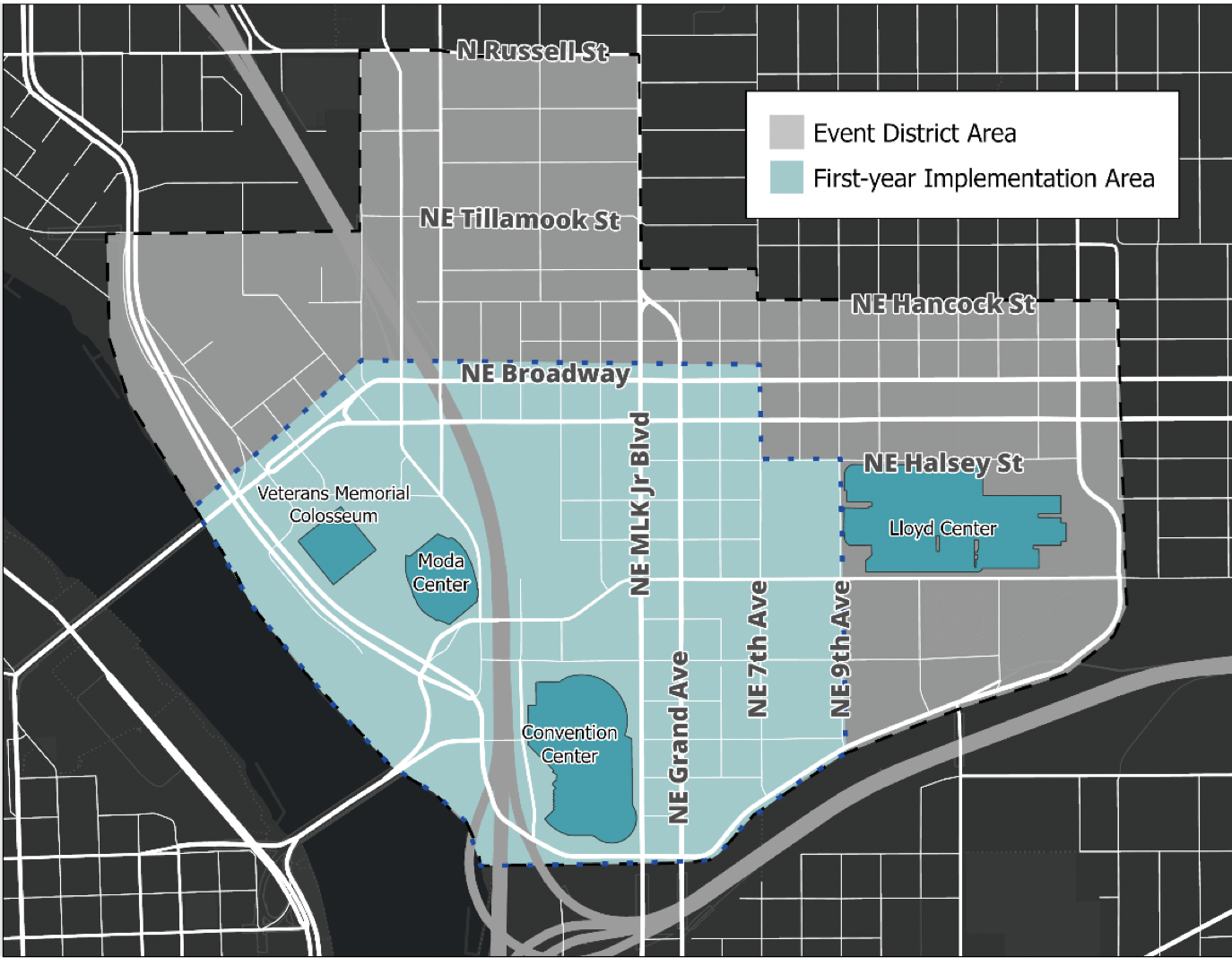 From next month, parking in the Lloyd will cost more at major events

There are many transit options people can use to get to the Lloyd’s District and attend a Trail Blazers game at the Moda Center or an event at the Convention Center. The Lloyd is one of the city’s major transit hubs—all MAX light rail lines pass through the area, and it’s a hotspot for TriMet buses and the streetcar. Yet people still choose to drive there. With a further increase in parking fees, the Portland Bureau of Transportation (PBOT) hopes to change that.

Starting in September, PBOT will implement an event parking zone in Lloyd’s, increasing the price of on-street parking from $1.20 to $3 per hour at large events with more than 10,000 people, such as concerts and basketball games. According to the PBOT, this is to “encourage less driving and more use of public transport, cycling and other means of transport” and to “relieve the pressure on the people who live in the area, reducing traffic and making it easier for residents and other visitors to find them. street parking. »

The event rate will apply from 8 a.m. to 10 p.m. for major events starting at 5 p.m. or earlier and from 5 p.m. to 10 p.m. for major events starting after 5 p.m. At present, parking meters in Lloyd’s east of NE Grand Ave only operate until 6 p.m., including during large events, so people who park on that side of Grand to attend at an evening basketball game can park for free. The increased rate will also apply on Sundays when there is a qualifying event – at present Lloyd’s meters do not operate on Sundays at all.

However, the new policy will also change meter hours on non-event days to end at 6 p.m. across the district, including the area west of Grand Ave, which currently runs until 10 p.m. It will also increase some pay and display parking windows in the neighborhood from 2 a.m. to 5 a.m.

An Event District parking lot has been in place around downtown Providence Park since 2011, where it costs $4 an hour to park a car on the street during Portland Timbers and Thorns games. Proponents of Lloyd District event parking have been advocating for years for the same treatment for the area surrounding Moda and the convention centers, but Portland City Council only agreed to go ahead last April .

Local car parking reform advocates say the Lloyd District is particularly notable for its abundance of parking, both on and off the street. While this fee increase won’t solve all of the parking problems plaguing the area, advocates say this kind of demand management is needed to push people into alternative modes of transportation.

But some people weren’t happy about the increased parking fees. In April, Oregon editor Brad Schmidt sparked heated discussion on Twitter when he tweeted about the event parking district map, calling it a “money grab”. From Schmidt’s perspective, PBOT should have first tried to simply increase meter hours and charge normal rates from 6-10 p.m. and Sundays before increasing the fee to $3. Others were of the opposite opinion and asked the PBOT to increase the fees even more.

PBOT is open about using parking revenue to manage the office budget deficit. In July, citywide parking fees were increased by $0.20, with additional revenue dedicated to funding a new Transportation Portfolio program to increase access to multimodal transportation for low-income Portlanders . Additional revenue generated from parking in Lloyd’s District will also go to this program.

Another point of contention is that the fee increase in Lloyd’s District will apply to everyone using on-street parking during applicable hours, not just people attending events. To alleviate some of this concern, PBOT will allow Lloyd Center residents with vehicles to sign up for a no-citation list with parking enforcement during event days.

Either way, the new fee increase won’t send people scrambling. The Lloyd District is full of car parks and car parks: if residents or frequent visitors to the transport-rich pedestrian area feel the need to drive a car, they will always have a place to park it.

As UCLA urban planning researcher Donald Shoup (and father of the modern parking reform movement) predicted, the numbers show that pricing on-street parking based on demand – instead of subsidizing it like cities have done so so far – can be an effective tool to reduce car dependency. People won’t like this because they are used to parking their car for free or at very low cost. But if we want people to get out of their cars and into transit, cycling and other sustainable modes of transport, something has to give.

The first event that will activate the event district parking fee increase is the Rose City Comic Convention on September 9th. After that, the rates will be in effect for approximately 90 days per year – you can view PBOT’s schedule of events that will trigger the fee increase on their project website.

Taylor has been BikePortland’s editor since November 2021. She has also written for Street Roots and Eugene Weekly. Contact her at [email protected]